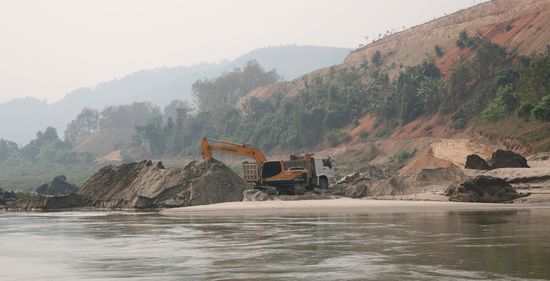 There are significant outstanding concerns regarding the quality of studies and information relied on during the Prior Consultation to assess and understand the project’s environmental and social impacts on the Mekong River. This includes the project’s transboundary impacts in Thailand and other neighboring countries, and its cumulative impacts with other existing and proposed hydropower projects in the Mekong basin. There are further concerns over the quality of national consultations conducted and public participation in the Prior Consultation process.

The MRC’s draft Technical Review of the Pak Beng Dam’s project documents, including the Environmental Impact Assessment (EIA) and project documents found significant gaps in data provided on fisheries, hydrology and sediment, and concluded that the transboundary impacts of project had not been fully assessed. An independent expert review of the Pak Beng Dam EIA, commissioned by International Rivers, also concluded that the information provided by the developer was insufficient to evaluate the full extent of the impacts and consequently the viability of proposed impact mitigation measures. Analysis of the Transboundary and Cumulative Impact Assessment found an absence of meaningful public participation in preparation of the study and no consultation with communities who would be affected by the project.

At a national level, civil society and local communities have raised strong concerns regarding the limitations of consultation meetings held in Cambodia, Thailand and Vietnam. These meetings have been characterized by a lack of representation, in particular from affected communities, as well as limitations in project information presented and the scope of discussion. The project developer did not attend consultation meetings at a national level and therefore were not able to respond to the questions of participants. In Thailand, concern over the transboundary impacts of the Pak Beng Dam, and the weakness of national level consultation and information sharing has prompted a lawsuit filed by Thai Mekong communities in Thailand’s Administrative Court against the Thai National Mekong Committee.

Communities in Thailand are extremely concerned about the transboundary impacts of the Pak Beng Dam. Given the location of the project close to the border to Thailand, there is an urgent need for adequate assessment of the dam’s transboundary impacts. Furthermore, decision-making must include participation of local communities whose livelihoods and food sources will be affected as a result of the Pak Beng Dam. This includes communities throughout the lower Mekong River Basin whose way of life depends on the Mekong River and is at risk due to dam construction.

The MRC Secretariat has framed the Prior Consultation as focused on steps to mitigate and minimize harm resulting from the Pak Beng Dam. However, without sufficient baseline data and adequate impact assessments, it is not possible to develop viable and context specific mitigation measures, especially in an ecosystem as complex as that of the Mekong River. With both the Xayaburi and Don Sahong Dams, construction commenced in the absence of necessary baseline studies. As the projects have advanced, very little information has been made publicly available about the progress of ongoing studies and impact monitoring.

The Pak Beng Dam must not follow the same path as the Xayaburi and Don Sahong Dams. Mekong governments must push for adequate project studies to be conducted before a decision is made to proceed with the dam and before project agreements are signed and construction begins.

The timeframe for the Prior Consultation process for the Pak Beng Dam must be extended to allow for updated studies to be evaluated by MRC member countries. This should include consideration of the final findings of the MRC Council Study, which will be completed in December 2017. There is an urgent need for shared, regional decision-making that is based on quality scientific studies and on a broader awareness and understanding of transboundary and cumulative impacts of dams on the Mekong River mainstream.