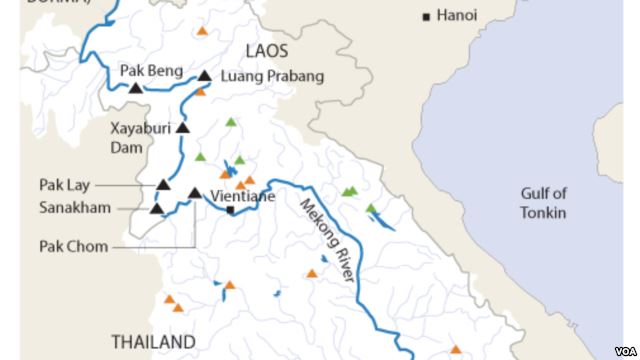 PAKSE, LAOS—A public consultation organized by the Mekong River Commission was held in Pakse, Laos, last week, where opponents continued to call for Laos to reconsider a controversial dam project.

Malaysia’s Mega First Corporation, a company tasked with building the Don Sahong dam, briefed regional participants on its social and environmental impacts, in the meeting on Friday.

But officials from Cambodia, Thailand and Vietnam remain skeptical of their findings of no significant impact or threat to fish population or migration.

The findings failed to address trans-boundary impacts, a main concern raised by environmentalists.

Cambodia, whose border is just two kilometers from the dam site, urged the commission to “educate” Mega First about the legal framework of such a controversial project and said there is no baseline data on the fish migrations or populations.

“For the sustainable development and preservation of the Mekong River Basin, we, the neighbors of the MRC, need a project that is beneficiary and does not affect other relevant states or that just has a minimal effect that is acceptable,” Kol Vathana, deputy secretary-general of the Cambodian National Mekong Committee, said at the meeting.

Chaiyuth Sukhsri, a member of Thai National Mekong Committee, said Thailand is concerned about the dam site, which lies in a “special area.” “So we need a lot of information and require a lot of knowledge,” he said.

Vietnam, which has been voicing strong opposition to the project, urged the company to do more studies on the long-term impacts this may have on countries downstream.

“We need further monitoring time, like five or 10 years, to monitor how the fish migrate and how the channel is suitable, and that’s very important,” Nguyen Hong Phuong, deputy director-general of the Vietnamese National Mekong Committee, said. “We cannot have the premature conclusion that the channel is suitable for the fish to migrate.”

NGO representatives who were invited to the forum urged all governments to listen to concerns raised by their people, while Save the Mekong has called for a complete cancellation of the project. Environmental watchdog International Rivers issued a statement questioning the motives of the consultation forum, saying it would help legalize the project and allow it to go forward.

However, Mega First said it is still in negotiations with Laos and has not signed any agreement on the construction yet.

In an interview with VOA Khmer, Daovong Phonekeo, director-general of Laos’ department of energy policy and planning, in the Ministry of Energy and Mines, said the country is aware of the concerns of its neighbors.

“But we have studied the project since 2006 and have a lot of data,” he said. “We’re very sure the mitigation measures we are going to do would have a minimal impact to the downstream and upstream countries.”

The hearing, or “prior consultation meeting” will begin in Pakse today, more than four months after it was scheduled to get underway.

But activists said the exercise is likely to be fruitless and will serve only to justify the construction of the dam in Laos’ Champasak province.

Following pressure from groups concerned about the ecological impact of the dam, the Lao government agreed at a Mekong River Commission (MRC) meeting in June to organise the hearing process over a period of six months, beginning on July 25.

“The Lao government has clearly stated they intend to proceed with the Don Sahong dam, in spite of the ongoing prior consultation process,” said Ame Trandem, Southeast Asia programme director for International Rivers (IR). “With this attitude, it is difficult to see how the process can be anything more than a rubber stamp.”

Cambodia, Thailand and Vietnam have expressed concern about the potential trans-boundary impact of the dam. A Mekong agreement means the three countries are also required to consult people about the project.

Representatives of civil society and state officials from Cambodia, Laos, Thailand and Vietnam yesterday visited the dam site, where preparation for construction work began more than a year ago.

At the Second MRC summit in April, Cambodia and Vietnam called for the Don Sahong dam project to be delayed to allow for a trans-boundary impact assessment. The project has been criticised for lacking such a study.

Thai villagers living along Mekong basin have expressed fears the project may affect fish in the river.

“The prior consultation process for the Don Sahong dam has been set up to fail, visibly following the same pattern as the Xayaburi dam,” said Pianporn Deetes, Thailand campaign coordinator for IR.

The construction of the Xayaburi hydropower dam began in early 2012, before the government launched the prior consultation process for the 1,285-megawatt power generating facility.

The Thai Department of Water Resources has organised meetings on the Don Sahong project in five provinces. Meetings were held in Nakhon Phanom and Ubon Ratchathani this week, but locals said no documents were distributed to them in advance.