On the occasion of the Mekong River Commission’s (MRC) regional stakeholder forum on
the Pak Lay Hydropower Project, Save the Mekong – a coalition of non-government
organizations, community groups and concerned citizens in the Mekong region – calls for a
new Transboundary Environmental and Social Impact Assessment (TBESIA) and
Cumulative Impact Assessment (CIA) for the proposed Pak Lay dam due to the poor quality
of the current assessments. Pak Lay is the fourth dam on the lower Mekong mainstream in
Lao PDR and has recently commenced the MRC’s Prior Consultation procedure.

Save the Mekong, a coalition of non-government organizations, community-based groups and concerned citizens within the Mekong region, announces our intention to boycott the Mekong River Commission’s Prior Consultation process for the proposed Pak Lay hydropower project in Laos. Pak Lay is the fourth dam on the lower Mekong mainstream.

Donor countries and development agencies must support the Lao government in seeking compensation from the dam companies, and re-direct their aid policies that rely on hydropower development

On July 23rd, a devastating incident occurred in the Sanamxay District of Attapeu Province in southern Laos. The top of a saddle dam (*1) installed at one of the reservoirs of the Xe Pian-Xe Namnoy hydropower project (*2) collapsed, releasing a massive amount of water. As a result, six villages directly downstream were inundated by the water, while 13 villages were also affected by severe flooding. The Xe Pian-Xe Namnoy dam is under construction in the Sekong River basin, a transboundary tributary of the Mekong River. As a consequence, the heavy flow of water has also reached downstream into Cambodia, causing damage to border communities in the Stung Treng Province. 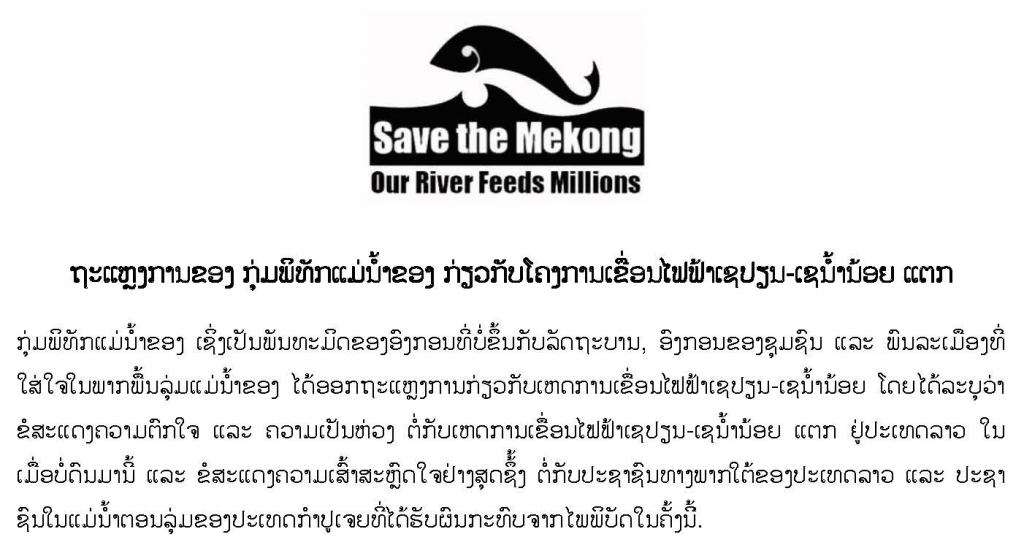 Save the Mekong, a coalition of non-government organizations, community-based groups and concerned citizens within the Mekong region, wish to express our shock and concern at the recent collapse of the Xe Pian – Xe Nam Noy hydropower project in Laos, and our deep condolences to communities affected by this tragedy, both in southern Laos and downstream in Cambodia.